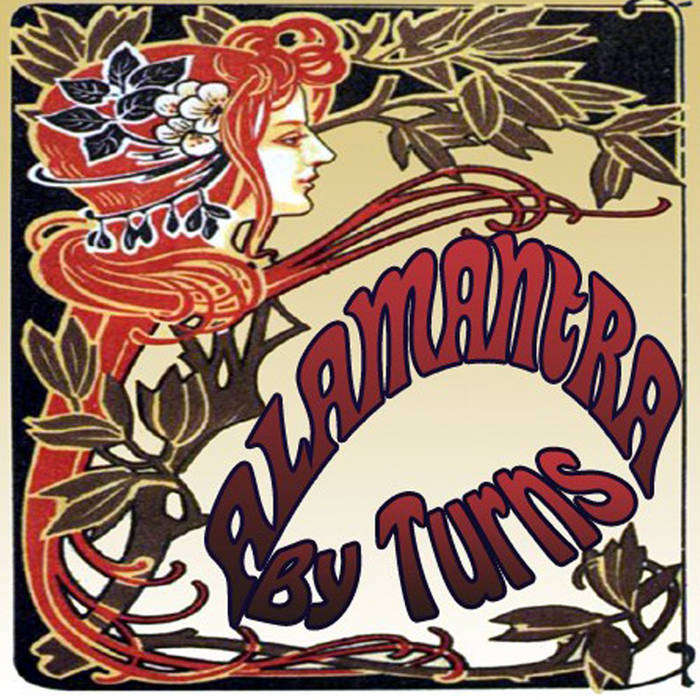 Alamantra began in Birmingham, Alabama in 2000.
They play a mix of psychedelic rock, blues, groove, folk- rock & down home jam.
Though the term “indie” has been reduced to being a misnomer, Alamantra truly is an indie band. From the beginning, it has been built on a DIY ethic.
The current lineup features:
Bobby Shiflett: Gtr. Vox
Steve Casteel: Gtr.
Ken Shiflett: Drums
Richmond Culp: Bass, Vox ... more

Track Name: Mark of Cain - Unsettled
Dreams of the hawk still haunt the summer sky
This dying land is broken, the river has run dry
We wept for the days of bird and butterfly
Long gone …so long

All the people say beware the mark of Cain
They would not dare to know your cares, the will not share your pain
Branded by a moment destiny ordained
For the sun …must shine on

All our days are numbered, the darkest paths we tread
The monster cannot slumber for his dreams in red
In the dawn Able died, from the ground his blood cried
Long gone …so long

There aint no saints in Zion
No sinners either as far as I know
There aint no bag of tricks
No quick and easy fix
In Zion it’s just a show.

I swam in the streams of Babylon
I swam in the water of the Rivers of Life
The Priest of the Stars, he knew my name there
He knew the troubles I call my life

There aint no saints in Babylon
No sinners either as far as I can tell
You can get your kicks
On the other side of the River Styx
But in Babylon, life is hell

Underneath the cedars of Lebanon
Sleeps the secret of a holy land.
The seventh son of a seventh son
Aint the son of the prodigal man

There aint no saints in Lebanon
No sinners either as far as I can see
I’ve been up and down these roads
All the way to Jericho
On up to Tyre through Galilee
Still unsettled
Still not free
Still unsettled
Still not free
Track Name: The Old Trickster's Last Grand Parade
Walking in from the edge of town
He doesn’t look up but he never looks down
The old trickster’s last grand parade
The crowd does fade ….from view

Finding all the things hidden on the side
Where’s the magic, now?
Mind you what it brings when you take the ride
Feel your soul go down

You may know what’s in the ground
But do you know what makes the sound?
The root of the small tree is the fruit of the tall tree
And that’s how it all works out

Feel the sky
Falling down

When you really think you’ve got it all worked out
Will you fill me in?
Abel’s apparition was a shadow of doubt
And there he goes again

You may know what’s in the ground
But do you know what makes the sound?
The fruit of the small tree is the root of the tall tree
And that’s how it all works out

Feel the sun
Shining down.
Track Name: Marvel
What are you afraid you’re going to lose this time?
I know sometimes it’s hard to swallow
Everybody has got to sweat sometime
How the sky glows as the day goes and still the sky glows

Mine is a mood of thirty-one flavors
I’ve got more color than a rainbow could know
I won’t do you any favors
It’s the least I can do, I hope that it will comfort you
It’s the best I can do

Now this world is full of thunder
And a fear has taken hold
Try to find that sense of wonder
That you use to know, wonder made us grow
Re-member that you know

The aeroplanes are flying high tonight
Transmitting to the mind as they criss-cross through the skies
As we stood upon the earth
I felt a tremble from inside
It felt like the first time
I knew I had to try
Track Name: Alarm Clock
It’s 9:11 in the morning
Time to wake it up
The day came with no warning
There was no time to make it up
As the bell rings
And wakes us from our dreams
The last thing we see
Is the land of the free

It’s 9:11 in the morning
The day has broken loud and clear
And the silence is so alarming
As it echoes in my ear
Angels shake their wings
And try to shake us from our dreams
The last thing that we see
Is the land of the free

When fear is on the lips of everyone we hear
We forget who we are and what we’re doing here …Hey! Hey! Hey!

Who will step forward? Who will speak for us?
Who will risk it all for that seat on the bus?

Share this:
Track Name: The Symphonette
Instrumental
Track Name: Voodoo Mouth
One mere mortal’s broken rhymes
Tell the tale of the life and crimes
In the age of the Voodoo Mouth

Hypnotized! Hypnotized!
Frames and plots and lies and lies
We’ll be back with a body count

What if your life was blown away by a hurricane?
And everyone you knew was washed away?
And no-one came for days and days?
To see if you were ok?

One mere mortal’s broken dream
Feed the fires of worldly things
Oh the schemes of the Voodoo Mouth!

Does not forget, cannot forgive
Suffers not to let live
On the scene live accounts

The deal was done and they had their way
Then on to Baghdad and Guantanamo Bay
With Halliburton and hell to pay
Spat from the Voodoo Mouth.

What if your life was blown away by a hurricane?
And everyone you knew was washed away?
And no-one came for days and days?
To see if you were ok?
Track Name: Rocker's Requiem
I remember the day you told me John Lennon died
I rose up from my bed and I cried
That night as Judas waited by the front gate
And took our love to feed our hate

Christ you know it aint easy
You know how hard it can be
I still miss the big easy
And those nights on Bourbon Street.

Bandcamp Daily  your guide to the world of Bandcamp

Featuring Gary Bartz, 5 years of Rhythm Section Intl and an LP of the week by Nicolas Jaar